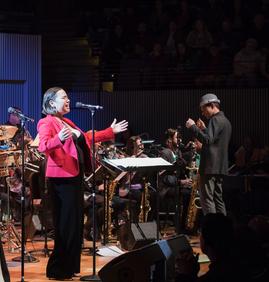 ​​Jamie Zee - Live at the Plaza

​​SFJAZZ hosts Jamie Zee and her local musicians for their music in the plaza series. Their band will be performing an array of compositions and arrangements of originals as well as the classics of funk, soul, jazz, reggae, and Afro-Cuban jazz. Enjoy the fusion of cultures she brings from all around the Bay Area. Her style is uniquely San Franciscan and embodies the life of an LGBTQ, Chinese American woman.​​

​A collaboration of composition, arrangement and performance is being documented in a feature-length film entitled "Sign my Name to Freedom", intended for release in 2019 via public broadcasting and film festivals around.

Jamie Zimmer, a student at San Francisco’s Ruth Asawa School of the Arts, is finishing up her sophomore year.

​Twenty-three-year old Jamie Zee set out to make a musical built on the original music of the nation's oldest park ranger who's still working at the Rosie the Rivereter/World War II Home Front National Historical Park in Richmond at age 100.​​

​Zimmer was an excellent choice for bringing Soskin's words to performance.  Between the clarity of her diction and her solid sense of pitch, the attentive listener could relish the full impact of every phrase in Soskin's text.  Her delivery was judiciously seasoned with improvised vocalizations that reflected the poignancy of the text, particularly in its expression of frustration.  Soskin was skillful in keeping the anger under control; and, in doing so, she left that intensity to be filled in by any listener paying close attention to her words.​  ​

​Vocalist Jamie Zimmer, a first-year student at CJC, was awarded second place with a scholarship to the California Jazz Conservatory.

A Jazzy Afternoon at Kepler's: Celebrating the Life of Dr. Herb Wong and the Launch of Jazz on My Mind​ featuring feature live musical performances by Jamie Zimmer.

Jamie Zimmer's sold out project was part of the San Francisco Bay Area Theatre Company's New Roots Theatre Festival at the Brava Theater.  The Festival  is a beneficiary of the Dream Keeper Initiative.

​Ensemble member Jamie Zee also shines, with a mature, thoughtful alto that could effortlessly sustain the whole show if it needed to.​​

​......those are the lovely pipes of Jamie Zimmer.